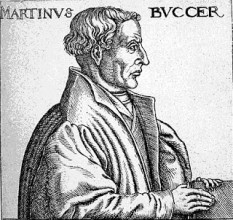 This was the second lunch time lectureof Spring 2013 given by Pastor Austin Walker on Martin Bucer.

The second of this term’s lunch time lectures at the Library took place on February 18. We again rather struggled to get into double figures but it was good to hear Austin Walker give an excellent overview of the life of forgotten Reformer Martin Bucer (1491-1551). Younger than Luther and Zwingli (by 8 years) and older than Calvin (by 18 years), Bucer is the man who mentored Calvin during his three year exile in Strasbourg, brought about the ultimately unsuccessful Marburg Colloquy and spent his final years in Cambridge at the request of Thomas Cranmer.
A fascinating figure he was a Dominican monk who became a zealous Reformer in Strasbourg, where he worked with Capito, Zell and others from 1523-1549. Calvin said of him “In addition to his profound learning. abundant knowledge, keenness of intellect. Wide reading, and many other varied excellences, in which he is surpassed by hardly anyone at the present day, this scholar, as we know, is equalled by few and is superior to very many. It is to his especial credit that no one in our time has been more precise or diligent in interpreting scripture than he.”
Pastor Walker surveyed his pastoral theology which has been translated into English by Peter Beale and published by Banner. He went on to talk of his instigation of confirmation for the baptised and his attempts to form fellowships within the state church, a plan doomed to eventual failure.
There as also an interesting reference to Bucer’s second wife, Wibrandis, who had previously been married to Oecolampadius the Basel Reformer, her second husband, and Matthew Zell, Bucer’s fellow Reformer in Srasbourg.
The next lecture will be on Monday March 18 2013 and is on Roger Williams and Liberty of conscience. The lecture is to be given by Rev Mostyn Roberts of Welwyn. We will start at 1 pm. Do come and join us if you can.