Densham on Doddridge on Preaching 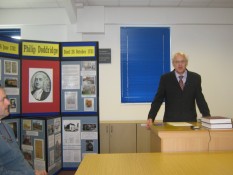 Lunch time lectures are held at the Library from time to time and it was good to see us in double figures for the last one to hear one of our trustees, Dr Ian Densham from Hemel Hempstead, on Philip Doddridge and preaching. The lecture is available from the Library in audio format.

It was a great joy to be at another lunch time lecture at The Evangelical Library on May 16. Dr Ian Densham spoke on Philip Doddridge and preaching.
Dr Densham who has a long held interest in Doddridge began with a brief summary of Doddridge’s life as a pastor and as the leader of a non-confomist academy in Northampton, mentioning his “unceasing concern for revival” among other things.
He then focused Doddridge’s lectures on preaching found in his complete works. (These are currently available from Tentmaker at http://www.tentmakerpublications and can be accessed on Googlebooks.)
Dr Densham took us through the lectures which certainly are full of good things on what to read, how to preach and many other related matters.
He began by quoting from this passage from Job Orton:
The Doctor’s manner of lecturing was well adapted to engage the attention and love of his pupils, and promote their diligent study of the lectures. When the class was assembled, he examined them in the last lecture; whether they understood his reasoning; what the authors referred to, said upon the subject; whether he had given them a just view of their sentiments, arguments, and objections, or omitted any that were important? He expected from them an account of the reasoning, demonstrations, scriptures, or facts contained in the lecture and references. He allowed and encouraged them to propose any objections which might arise in their own minds, or which they met with in the authors referred to, of which they did not think there was a sufficient solution in the lecture: or to mention any texts that were misapplied, or from which particular consequences might not be fairly drawn; and to propose others, which either confirmed or contradicted what he advanced and if at any time their objections were petulant or impertinent, he patiently heard and mildly answered them. He was solicitous that they should thoroughly understand his lectures, and what he said for the illustration of them: if he observed any of them inattentive, or thought they did not sufficiently understand what he had said, he would ask them what he had said that he might keep up their attention, and know whether he expressed himself clearly. He put on no magisterial airs, never intimidated nor discouraged them, but always addressed them with the freedom and tenderness of a father. He never expected nor desired that they should blindly follow his sentiments, but permitted and encouraged them to judge for themselves. To assist them herein, he laid before them what he apprehended to be the truth with all perspicuity, and impartially stated all objections to it.  He never concealed the difficulties which affected any question, but referred them to writers on both sides, without hiding any from their inspection. He frequently and warmly urged them not to take their system of divinity from any man or body of men, but from the word of God. The Bible was always referred and appealed to upon every point in question, to which it could be supposed to give any light. … It was his great aim to give them just and sublime views of the ministry, for which they were preparing, and lead them to direct all their studies so as to increase their furniture and qualifications for it. To this end he endeavoured to possess them with a deep sense of the importance of the Gospel-scheme for the recovery of man from the ruins of the apostasy, and his restoration to God and happiness by a Mediator; to show them that this was the great end of the divine counsels and dispensations; to point out what Christ and his Apostles did to promote it; to display before them those generous emotions of soul which still live and breathe in the New Testament; and then, when their minds were warmed with such a survey, to apply to them as persons designed by Providence to engage in the same work, to support and carry on the same interest, who therefore must be actuated by the same views, and imbibe the same spirit. He thought such as these the most important lectures a tutor could read; tending to fill the minds of his pupils with noble and elevated views, and to convince them that the salvation of one soul was of infinitely greater importance than charming a thousand splendid assemblies with the most elegant discourses that ever were delivered. He thought such a zeal and tenderness would arise from these views, as would form a minister to a popular address, abundantly sooner and more happily than the most judicious rules which it is possible to lay down. He frequently inculcated upon them the necessity of preaching Christ, if they desired to save souls; of dwelling much upon the peculiarities of the Gospel scheme, and the doctrines of Christ and the Spirit; of considering their own concern in them, and endeavouring to feel their energy on their own spirits, that they might appear to their hearers as giving vent to the fullness of their hearts on its darling subjects.

Category: NewsBy The Evangelical Library19th May 2011