The lectures arranged are as follows: 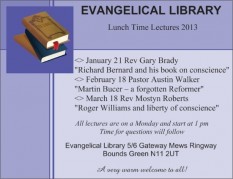 All lectures will start at 1 pm and go on for about 40 minutes and time for questions will follow.