Owen and the Trinity 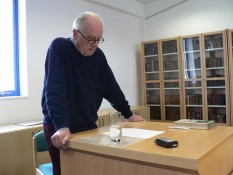 The single figure turn out was a little disappointing but it was good to be at the first lunch time meeting in the new building of the Evangelical Library. Professor Paul Helm gave a fascinating introduction to a forgotten little work by John Owen called A brief declaration and vindication of the doctrine of the Trinity (it is in Volume 2 of the Works and can easily be found online). It actually goes on to deal with Christ’s person and satisfaction but we just looked at the first part.
It was first published in 1668/9. At this time Owen was living in Stoke Newington and serving an affluent dissenting congregation. His death in 1683 was some 16 years away.
Owen’s concern in this work written for a popular audience is to steer a course between the anti-rationalism of the Quakers and others and the rationalism of the Socinians and Cambridge Platonists (such as Chillingworth, whose statement about the Bible alone being the religion of Protestants is often misunderstood). Owen was, as Dr Helm put it, walking a tightrope. Puritanism was already being swept away by a Unitarian Anglicanism that would grow and grow and greatly infect nonconformity too. The Trinity today is often forgotten and marginalised and Owen’s work is a good antidote.
Owen begins by establishing the doctrine from Scripture. It is not a model, as some are fond of putting it today, but what the Bible actually teaches. There is no ambiguity. It is clearly taught there. Owen insists on that. He is clear that God is one and that the Father is God. Further, more contentiously, Jesus Christ is God, the eternal Son of God. He establishes this from Old and New Testaments. Fourthly, he demonstrates the deity of the Spirit and, finally, that the three are one though distinct. He concludes

that there is nothing more fully expressed in the Scripture than this sacred truth, that there is one God, Father, Son, and Holy Ghost; which are divine, distinct, intelligent, voluntary, omnipotent principles of operation and working: which whosoever thinks himself obliged to believe the Scripture must believe.

He then moves onto the question of what we do when the doctrine is assaulted. He reminds us that in the history of the church terms have been used to defend the doctrine – the doctrine not the mystery. Owen argues that we may and must make use of such terms as are available even though not found in Scripture. He says

to deny the liberty, yea, the necessity hereof, is to deny all interpretation of the Scripture, – all endeavours to express the sense of the words of it unto the understandings of one another; which is, in a word, to render the Scripture itself altogether useless. For if it be unlawful for me to speak or write what I conceive to be the sense of the words of the Scripture, and the nature of the thing signified and expressed by them, it is unlawful for me, also, to think or conceive in my mind what is the sense of the words or nature of the things; which to say, is to make brutes of ourselves, and to frustrate the whole design of God in giving unto us the great privilege of his word.
Wherefore, in the declaration of the doctrine of the Trinity, we may lawfully, nay, we must necessarily, make use of other words, phrases, and expressions, than what are literally and syllabically contained in the Scripture, but teach no other things.

He then goes further than this and asserts that if a biblical truth is accurately expressed in non-biblical language then that truth is also valid.

Whatever is so revealed in the Scripture is no less true and divine as to whatever necessarily follows thereon, than it is as unto that which is principally revealed and directly expressed. For how far soever the lines be drawn and extended, from truth nothing can follow and ensue but what is true also; and that in the same kind of truth with that which it is derived and deduced from. For if the principal assertion be a truth of divine revelation, so is also whatever is included therein, and which may be rightly from thence collected (ie deduced).

He concludes then that as the Bible reveals Father, Son and Spirit to be one God then they must be

The claim is not to inspiration but to having the truth.
It is a way of thinking that some modern evangelicals would be uncomfortable with. The fear is that Owen has opened the door to rationalism. However, he is clear that man’s mind is far from being the measure of all things. He carefully maintains the Creator/creature distinction and warns against mere carnal reasoning. Nevertheless, the finite can understand the infinite at least in part. If the doctrine of the Trinity seems unreasonable to some it is because it is contrary to carnal reason.
A useful discussion followed. The Bible alone position is still attractive to many good people today who do not see the danger in that simplistic approach.

A full account of the address can be found at the following:
http://paulhelmsdeep.blogspot.com/2010/03/two-lessons-from-john-owen-i-trinity.html

A further lunch time meeting (on Lloyd-Jones and his prefaces) is set for 1 pm on Monday, May 17. Before then we have our opening, which is on Saturday April 17 at 3 pm. Do come and join us.